A film festival for everyone with a dash of diversity and invisibility made visible! 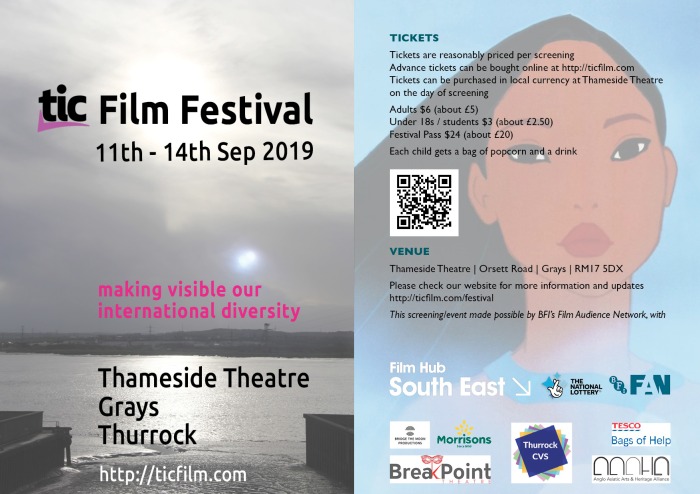 Thurrock International Celebration | TIC Film Festival | is back to entertain with an even bigger and more varied programme than last year. Now in its second year, it has a range of films for the family, different local communities and special interest groups. Tickets are totally affordable. £5 for adults and £2.50 for under 18s/students across the board. And children get free popcorn and a drink in line with many other family screenings at Thameside.

The popular Disney classic Pocahontas is screened on Sat 14th Sep at 11.30am. This is followed by the iconic Bollywood classic, Devdas, with its thrilling, spectacular dance numbers – a film lauded by many critics from all corners of the world as one of the best films ever made. This is preceded by a short Bollywood dance workshop to get audiences in the mood.

After this, there will be delicious Nepalese food on offer in the foyer with entertainment by Grays Pathfinders before the festival ends with the romantic Nepali film Nai Nabhannu La 5.

On Fri 13th Sep, there is a unique occasion to view International and British Diversity Filmsselected from submissions especially for the Festival. This is followed by a panel discussion ‘What Does Representation in Film Mean’. Then, excitingly, TIC Film Festival’s first award Ceremony for winning films submitted will be held.

In honour of the 21 Sikh soldiers who were massacred bravely defending the British Empire at Saragarhi, the new Indian historical drama Kesari is shown next. Introducing the film will be leaders from Grays Gurdwara who will speak briefly about the history of the Sikhs in Thurrock.

In line with invisibility, Rafiki, a banned Kenyan film in its country of origin, will be the first Festival film on 11th Sep. It is a beautiful film about the love between two young African women.

Importantly, new shorts from a fresh batch of film students from Anglia Ruskin University and South Essex College will be a great opportunity to spot the talented filmmakers of the future. These are free to watch in the high quality setting of Thameside Theatre on 12th Sep.

Then a rare jewel Around China With A Movie Camera (1900-1948). These films – all from the collection of the British Film Institute National Archive – were made by a wealth of British and French filmmakers, from professionals to intrepid tourists, colonial-era expatriates and Christian missionaries. Exploring 50 years of Chinese history across a diverse range of footage, the collection includes what might be the oldest surviving film to be shot in China – unseen for over 115 years. 12th Sep.

This event made possible by BFI’s Film Audience Network, with the support of The National Lottery.

View all posts by crossdrifts